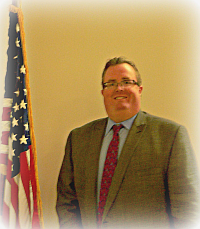 Halfmoon into office as the Town Supervisor on November 5, 2013.  Kevin began working for the Town of Halfmoon, Parks Department on March 1, 1988 while attending Mechanicville High School.  Kevin became a member of the Zoning Board of Appeals on January 1, 1994 and on February 7, 1995 he filled a vacancy on the Planning Board until he became a Town Board Member on January 1, 1998.

He worked at Overton, Russell & Doerr Law Firm for 3 years and in Oct 2000 he became a partner of Carola, Bagnoli and Tollisen Law Firm.  In November 2002 until April 2013 he became Town Justice for the Town of Halfmoon.  In October 2007 he became co-owner of Park Avenue Confectionary; Kevin is an “Entrepreneur” of Chocolates.

Kevin is very much involved with the community; he serves as an honorary member of the Halfmoon Senior Center from 1995 to present, is a current member of the Halfmoon Celebration Association since 1990, he is on the Board of Directors for Bishop Hubbard Senior Housing from 2001 to present and initiated the Character Counts Program while serving on the Town Board.  Kevin is a member of Temple Baptist Church in Halfmoon.

Kevin married Rebecca in 2001 and resides in Halfmoon with their two sons, Matthew and TImothy.